Inspired by friends validating my madness, and by going on an epic adventure from Berlin in summer, to Italy, I decided that despite being in my 40s it was time for an Interrail adventure! Also, I had seen a Twitter contact using Interrail for a business trip, and felt, WHY NOT?

I wanted to explore flying less. But, like many, I found the alternative confusing.

What Is The Alternative To Flying?

My hope with doing the migration this way, and through 196destinations, is that we can talk about the alternatives to flying a bit more, and understand the challenges, and make them a little easier for everyone reading.

So, I planned to leave Berlin and go to Munich. But the accommodation situation in Berlin had got even crazier, so I decided that I would spend some time in Leipzig, and then perhaps see some autumnal leaves in the Alps near Munich. WHY NOT?

The optimal situation for using my 5-journey Interrail pass would be if the train ticket cost 50 Euros or more. However, my first leg would not be far, so I took a FlixBus from Berlin to Leipzig. Comfortable seats, and an on-time service.

A small, clean city that was worth exploring. And it had a good tram & bus system to allow you to do so. I found an amazing AirBnB host that even picked me up from the bus station! AWESOME! A great mate also gave me a ticket to see Machine Head, which was at a fantastic small venue and super lively.

Thank you to my friend Anna for recommending the War Memorial. It was epic. And what a view from the top of the whole city.

Onwards, and time to use the first day of my Interrail pass.

I headed towards Munich, and then dived out again on the next train after arrival, to Garmisch, where I had found a few nights an affordable price. I was soo lucky with the weather. Autumn was in full effect on the trees, but it was blue skies and warm.

I had a great walk up the chucklesworth-named mountain, Wank. Then a super lecker Kaiserschmoren at sunset in a mountain gastro restaurant.

Then, it was time to leave Garmisch. Just a short trup to Munich on another FlixBus. I was really looking forward to seeing some friends in the city, and on the outskirts in Dachau, where we cycled around some lakes.

I’m off across the Alps today. Not just through Austria, but all the way Italy, and to its coast. An epic journey in itself. It would be another Interrail day. A couple of nights in Genova felt like a great reward at the end of the 10 hour travel day.

It was a big journey, leaving at 9am and not arriving in Genova until the evening. A journey of fantastic scenery that lived up to expectations. The undulating hills of the lower Alps leaving Munich gave way to the lower ski resorts heading into Austria.

Passing Innsbruck, the scenery became really stunning and quite dramatic, as the train would turn a corner with a steep mountain above, and reveal a valley that went off into the distance. All the while, we must have been climbing. Right on the border with Italy, it felt remote, and there were actual clouds rolling across the train track and through the station. There was a brief stop for the border check here, but my white privilege meant I was not asked for a passport.

And now, we started the descent into Italy, through the Dolomites. Really quite stunning, with more U-shaped valleys, than the classic high Alps V-shaped valleys. All along, it was like I had a widescreen view on the world, whilst I looked out the train window. I’m pretty sure I planned to read, but I didn’t even get up to go and look for the coffee that the OBB-powered train was sure to have. Such was my enthusiasm, I was like an excitable child, wondering what change in the view the next undulation would bring.

Arriving in Verona, it was time to change trains. Now I still don’t know if I’d accidentally booked a first class ticket, and the conductor let me get away with it with my regular Interrail ticket, but this train to Milano was swanky. I chatted to the French couple opposite, off for a night out in the city, whilst we tried to figure how to raise/lower/recline the ridiculously comfortable seats to the right angle. Super comfortable. And super fast. Swoosh – there goes Lake Garda, and then we’re already close to the city of Milan.

For the last train in this epic train day, I travelled on a coastal railway across rivers and bridges during dusk, arriving in Genova after dark. I’d booked a budget hotel not far from the station. On arrival, I was surprised to find it decorated with medieval art on the ceiling, and to find myself accommodated in a massive room. It was a bit basic in other regards, but a pleasant surprise. I had a walk around the town, which felt like a pre-renovation Málaga, but found it a little quiet. Eventually I found a square with some cafe bars.

Sadly, my plan to swim in Italy, France, and Spain didn’t quite work out, as it had become a little grey, and it turned out to be the start of a storm further along the Mediterranean.

Nice? Well, between Antibes and Nice, in Villeneuve-Loubet to be precise. I left Genova with an unannounced 1-hour delay. However, I had a great conversation with a maths teacher who’d moved to Milano to get work, and had ended up working for below minimum wage in a cafe after learning Italian for a couple of years. It made me feel privileged to have this travel option, but also wish I had got his details to introduce to online teaching!

Crossing into France, some border guards entered the train. But again, my white privilege was all the passport I needed.

That night was the windiest night I’ve stayed on a boat, ever. It’s again a privilege, but wow, it was more like being shaken to sleep rather than gently rocked. It also turned out that part of the train line was now washed away.

NEXT….well, this is where the international connectivity got very confusing, and perhaps the information on the storm could have been a lot better. With two of us looking, we couldn’t find a train from Nice to the Barcelona area. So, I would get a local train (or two…or four?) to Perpignan. Stay the night. Explore a castle 🙂 And then get the FlixBus again to Barcelona – WIN! 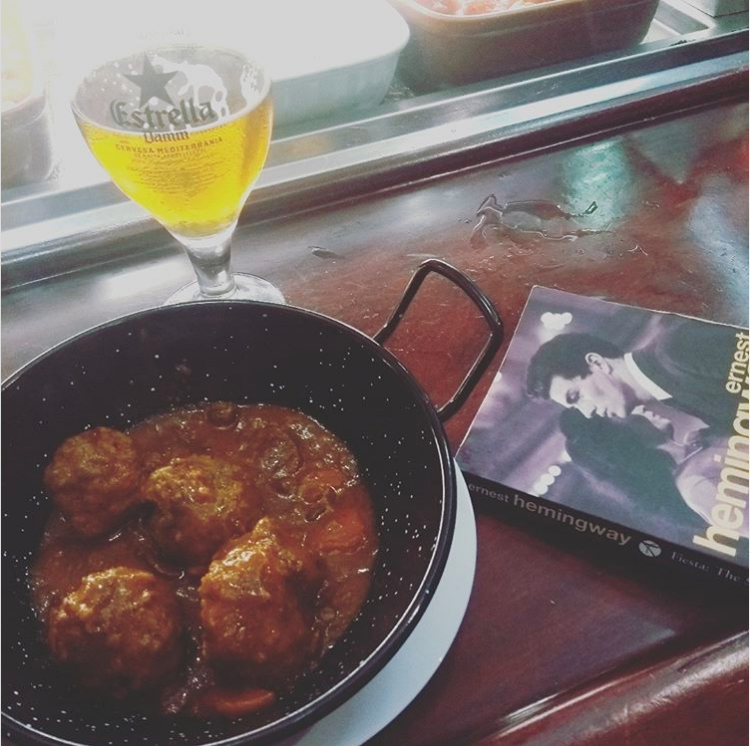 I got to visit my favourite tapas bar in Barceloneta, and catch up with a startup mate, before heading onwards – and straight through a strike in Barcelona!

From Barcelona Sants, we were zoom through the countryside at high speed in the direction of Madrid. A short 2 hour changeover there allowed for a quick look at a city square where they had an art exhibition on sustainability, followed by a quiet tapas and beer in a more hipster neighbourhood – up a steep hill! (Cheers for the recommendation George).

We left Madrid just before dark, skirting through Cordoba in pitch black.

Arriving in Málaga late at night, to see a friendly face, I was happy to find myself at journey’s end after quite a trek indeed. I’d made it!

3200kms! My god! I may have sworn quite a bit about trains, tickets, supplements, and delays. But I feel accomplished. Yes, I could have flown, but I have seen a lot more of Europe this way. I have noted lots of places I could return to. And I have also used considerably less carbon up than flying. It is estimated to be 8x less infact.

Rome2rio: Gives you the rough viability of a long-distance route. But not necessarily a good guide for prices.

One thought on “An Interrail adventure: Berlin to Málaga….”